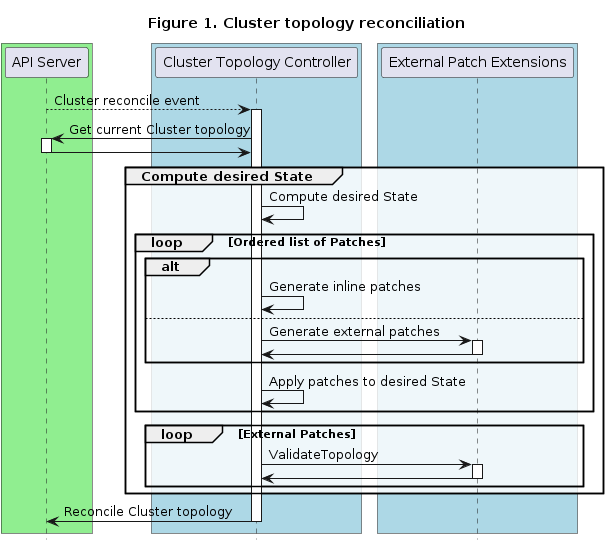 Inline patches have the following advantages:

External patches have the following advantages:

A GeneratePatches call generates patches for the entire Cluster topology. Accordingly the request contains all templates, the global variables and the template-specific variables. The response contains generated patches.

For additional details, you can see the full schema in .

We are considering to introduce a library to facilitate development of External Patch Extensions. It would provide capabilities like:

If you are interested in contributing to this library please reach out to the maintainer team or feel free to open an issue describing your idea or use case.

A ValidateTopology call validates the topology after all patches have been applied. The request contains all templates of the Cluster topology, the global variables and the template-specific variables. The response contains the result of the validation.

For additional details, you can see the full schema in .

There are some special considerations regarding Cluster API upgrades when the upgrade includes a bump of the apiVersion of infrastructure, bootstrap or control plane provider CRDs.

When calling external patches the Cluster topology controller is always sending the templates in the apiVersion of the references in the ClusterClass.

Note In this variant it doesn’t matter if Cluster API or the external patch implementation is updated first.

Variant 2: Deploy an additional instance of the external patch implementation which can handle the new apiVersion

Note In this variant it doesn’t matter if Cluster API is updated or the new external patch implementation is deployed first.